The half way point of the mission is today (and we are now the longest Mars analog mission done in North America). It is pretty hard to believe. Due to all the research projects going on here many of my activities are tracked (I’ve also tracked some on my own out of personal interest). A few statistics to cover my 120 days on “Mars”:

Books read: Quiet, Robinson Crusoe, Germs Guns and Steel, The Three Stigmata of Palmer Eldritch, A Place of My Own and A Walk in the Woods.
TV: All of Breaking Bad (save the final episode), all of Sherlock, all of Flight of the Concords, 3 seasons of Game of Thrones.
Movies: More than I can remember
Workouts: 109
Runs: 22 covering 78 miles in 10 hours
EVAs: 18 for a total of about 12.8 hours spent outside
Showers: 22, running water for 42 minutes
Meals: 26 group meals cooked
Photos taken: 2083
Emails: 891 sent, 6645 received
Words journaled: 40,125 (this includes many emails to family and friends as well as blog posts and journaling required as part of one of the studies)
3D prints: 4.9 lbs of ABS used to print 187 parts
Composting toilets emptied and cleaned: 2 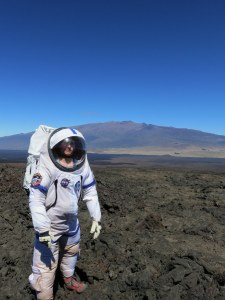 My first post was about things I was looking forward to and things I was expecting to miss (or not). I thought I’d revisit this list with half the mission complete (italics are original items, new items are underlined).

Things I’m looking forward to:
Getting a taste of what living on Mars might be like – This has been interesting and has helped convince me not only that I would still like to go to Mars that I think I could handle it as well.
Getting to know my crew mates – My crew mates are fantastic. I’m so pleased with how the crew selection turned out. I couldn’t have dreamed for better.
Self-directed, independent research – I’ve really enjoyed getting to spend time learning 3D printing, it has also been a useful capability to have in this environment. It also means that I always have something to do and have a creative outlet when I need it.

Things I’ll miss:
Friends and family – Yes. We ended up getting an app to do delayed voicemail. I didn’t think I would use such a thing but it has been great to hear some familiar voices and have some “conversations” a bit less formal than email.
Sunshine – Not quite as bad as I had thought. The dome lets in a decent amount of light.
Green things/seeing plants – Yes
Beer – Yes
Rock climbing – Yes
A run where I actually go somewhere – This is the most I’ve ever run on a treadmill but it just doesn’t do the same thing for me.
Long showers – Even a normal shower (where I don’t turn the water off while I’m there) would be awesome.
Normal food – Salad, fresh fruit, real milk and cheese, a piece of meat bigger than a pea in particular.
Going to shows/mosh pits – Yes, along with being in crowds in general (at least occasionally)
News – I feel a bit disconnected from the world, I suppose not surprisingly. I get news headlines everyday and mission support sends us a handful of articles but I miss getting to browse the news and pick what sounds interesting.
Food that you didn’t have to make from scratch – We take turns cooking for the entire crew so it isn’t like we each have to make every meal, but if I decided I want French toast for breakfast chances are I need to make a loaf of bread the day before, dry out some slices overnight and make it the next day. Going to a restaurant or just buying a loaf of bread at the store is going to be a nice change.

Things I won’t miss:
Commuting – True, don’t really miss driving in general either.
Shopping – Generally true, but I think the first few trips to the grocery store are going to be pretty magical. I’ve already been thinking about what I’ll buy.
Celebrity gossip – Can’t seem to escape this, partially my fault since I’m watching the Daily Show regularly.
My computer asking to update Java/flash – This just got traded for a bunch of other programs saying that they can’t update because they can’t reach their server. Not really any better off.
Political ads – Avoided these so far.
Bills – Managed to get the few I have all set to autopay so I never have to think about them.

They say that the 3rd quarter is supposed to be the hardest. The excitement is mostly gone and there is still a long ways to go. I can’t say that I’m feeling that yet and don’t really expect to. There have been only fleeting moments where I wasn’t excited and happy to be here. I’m more worried about having to leave in 120 days than I am making in through until then.